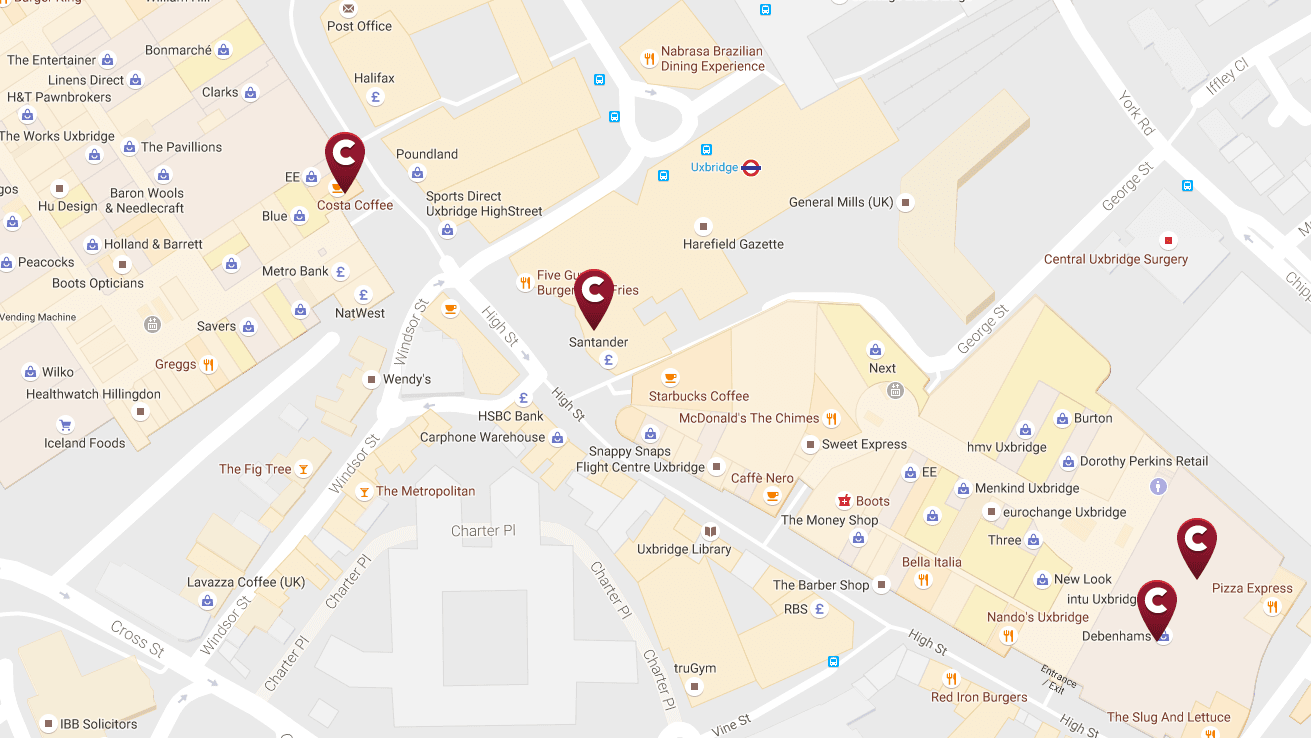 How many do we need?
As of July, Uxbridge town centre now has no less than four costa coffee shops, All within walking distance of each other and there has come a point we have to ask, how many do we actually need?

Once Starbucks was the butt of many jokes about the quantity of coffee shops that had been popping up. Comedy shows such as The Simpsons and South park commented on the fact that every day another Starbucks had shown up in small towns until there wasn’t a street that didn’t have one. In recent years, though, Starbucks has begun to fall out of favour and especially in England there has been a surge in the number of Costa coffee shops, as Starbucks dwindles.

What has caused us to fall in love with Costa anyway?

Well, when I first tried Costa (in the second of the four Uxbridge locations), over my usual Starbucks, I realised I could get a ‘Massimo’ (large) sized drink for a little less than a ‘Grande’ (medium) drink in Starbucks, so they won me over with their slightly cheaper, over-priced drinks.

The other factor besides price is probably personal preference. A few years ago Starbucks opted to start making their standard drinks with semi-skimmed milk as opposed to whole milk as they had done before so that you now had to ask for ‘skinny’ lattes for skimmed milk or ‘whole’ lattes for whole milk. It might seem like a small difference, but I rarely ask for “modified” drinks, just opting for a latte. So in Starbucks, I get a slightly stronger tasting semi-skimmed beverage and in Costa, I get a creamier whole-milk coffee. In fact Costa only stock full-fat or skimmed milk and don’t use semi-skimmed at all. This might not seem like much, but for those that get a creamier coffee in Costa than Starbucks and don’t know why, this may lead to favouritism.

The main reason I started to frequent Costa slightly more was due to the fact a Costa moved into Stockley Park and I could walk there for my daily cup o’ joe while also getting some exercise.

So apparently location can make a big impact on whether you go to a Costa or Starbucks and apparently Costa are now beating Starbucks at their own game.

Finally and perhaps most importantly, it is seen as British compared to the tax-dodging Starbucks.

Wikipedia tells me that Costa Coffee is a British multinational coffeehouse company and is headquartered in Dunstable, Bedfordshire. Founded in 1971 in London by brothers Bruno and Sergio Costa, it is now a wholly owned subsidiary of Whitbread, acquired by them in 1995. Costa is the second largest coffeehouse chain in the world behind Starbucks and the largest in Britain with a revenue just over 1.1 Billion last year.

Under Whitbread’s ownership, it has since grown to over 3,277 stores across 31 countries. Thre are 2,000 UK restaurants alone, over 5,200 Costa Express vending facilities and a further 1,200 outlets overseas.

Where are these Costas in Uxbridge?

There are four Costas in the Uxbridge town centre, two are near the entrance to Uxbridge train station and two are at the other end of the Intu shopping centre. In perspective, there is only one Starbucks (though they have an inside and outside section, both are run by the same staff), one Nero, one Pret, one KFC and two McDonalds. So Costa definitely has the lead in terms of shops.

The original Costa coffee in Uxbridge was situated to the right of the Uxbridge train station entrance, obviously chosen as a prime spot to get those commuters on their way into London every day. The downside for me personally, was the lack of space and soft seating, due to its size. It was slightly claustrophobic and I rarely visited.

When Uxbridge was redeveloped and the Chimes shopping centre was built (now rebranded as Intu Uxbridge), Starbucks arrived. This was really the first coffee shop I started to go to regularly, to meet friends and family for coffee and a chat. It was bigger, more open, they had big comfortable seats, sofas, and armchairs and they won me over. As many of the coffee shops are franchises, it wasn’t long before someone realised Uxbridge was going up the world and with the success of Starbucks, they knew people didn’t just want coffee for their daily commute, but during a shop or for their lunch break. So when a clothing shop struggled and prime premises at the entrance of The Mall (originally the pavillions) was left empty, Costa snapped it up. This leads us onto…

Situated at the entrance of The Mall shopping centre, previously The Pavillions, the second Costa in Uxbridge is visible from the first. When it arrived, almost everyone exclaimed, “another costa?” in slightly bewildered amazement. The new premises were much bigger, with Costa obviously directly competing with Starbucks’, bigger, laid back store. The new Costa was over 2 levels and with much more seating, including soft armchairs and sofas. There was a point at which I assumed the first may well close down and merge with the new larger one, but they both still exist in harmony to this day, so apparently not.
For a while, all was calm and still in the world. The one ring laid dormant at the bottom of the river Fray.

The third Costa arrived when the Uxbridge Odeon cinema had a facelift and decided to add some concessions to the large foyer area that had previously been taken up by a box office. They added a Ben & Jerrys ice cream counter and their very own Costa coffee. This is some way made more sense than the second Costa as it was at the other end of the Intu shopping centre and would catch the cinema goers that wouldn’t venture any further than the car park and the cinema foyer. I did benefit from this, as it was open until 9.30pm and was a good place to meet and chat when all the other places had closed. So now, after we all believed that we have reached max capacity, with coffee shops spanning the entire length of the Intu shopping centre, we were a little surprised when we saw a coming soon sign for yet another Costa. At first, I was in a state of shock and denial. Who on earth would want yet another Costa?! I assumed it was an old sign I’d never seen before, for an already existent one, or possibly a sick joke on the caffeine addicted – of which I am one. But no, it was of course, real.

The latest addition, to the ever expanding costa family in Uxbridge, is essentially a shop within Debenhams. Possibly a way to stave off the same cruel fate as BHS in an ever-more online world, they can make extra money from subletting their large retail space. But this is about 30 metres away, vertically, from the Costa in the Odeon. It now makes these two closer than the original two and I am beginning to wonder how many is too many? I mean, for me, we are there. But as absurd as I see this being, for someone, this is perfectly acceptable.
With the obvious economic downturn, there are already quite a few unused stores in the shopping centre, including the recently closed-down GAP. So there is plenty more room to add some Costas that you can stop at on your long walk between Costas.

How many are too many?

This is a serious question because, for me, we have reached that point. The Uxbridge shopping centre is becoming predominantly food outlets. This is by no means an Uxbridge specific problem, but a shopping habit shift to online has left shops unable to compete. Soon we will have a Costa and Starbucks between each fast food joint and the traditional restaurants. There will be hairdressers as there are now, but little need for anything else. The try-before-you-buy shops can only last so long if we try but buy online. So I guess four Costas is just about the right amount, right now. Right?

*Update* The Next (Fifth) Costa is Coming…

I’m not kidding… I was walking though Intu Uxbridge a few weeks ago and could believe my eyes when I saw a big black facade where The Gap once stood. Hmm, something must be going in there, I thought to myself… I go in for a closer look, and it turns out that Next will be moving or expanding into the shop. They are currently right next door, so it won’t take much.

But on the dark wall covering the glass, there are a few logos to get you hyped for the impending Next-goodness. We have the usual suspects including women’s, men’s, children’s and home. But it also features Lipsy London, and guess what? Costa. Yes, between the two Costa’s at each end of the Intu shopping centre… is a fricken Costa. Photographic evidence… 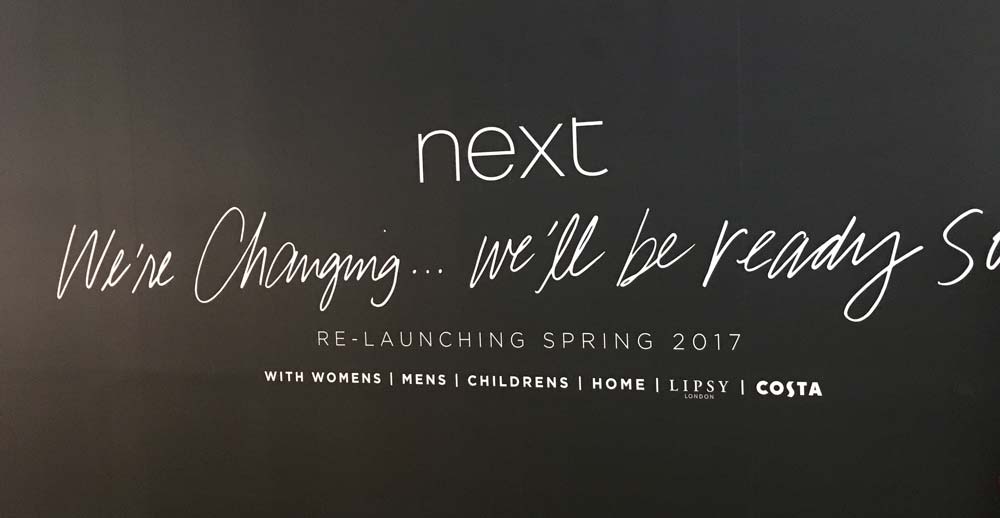