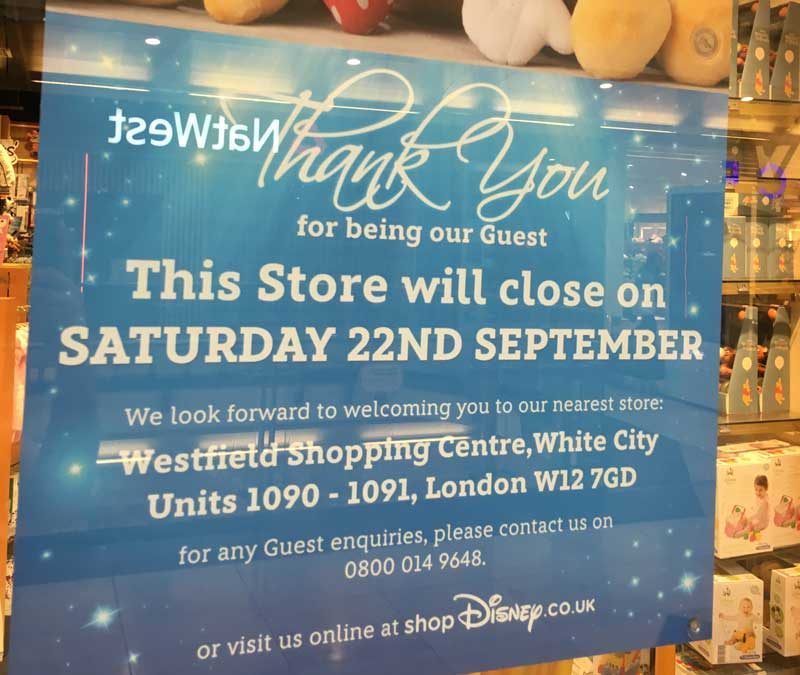 It is true, another of the Intu Uxbridge tent-poles is going, and what will replace it?

You may not frequent the Disney store, but it is a draw for many. The Disney stores are not as prevalent as other stores in Uxbridge, all of which can be easily replaced by another local store. But Disney stores are far fewer in their numbers. The sign of the outside is redirecting us to Westfield, not that it is particularly close. Whereas if you closed down Argos, there are a few within a 5-minute drive.

(A member of staff reminded me that there is a Disney store in Watford, so It may be telling that they don’t redirect you there. perhaps more closures are looming?)

That is why it is a shame that we are losing, what should be considered a tent-pole for Intu Uxbridge. Similar to the likes of Debenhams, and a few others (though gradually dwindling).

Next to the soon to be closed Disney store is the empty shop that once housed the upstairs of BHS. Now empty, it acts as a pop-up shop, currently, a children’s play area.

There is a small sign that says it too is going to close, so perhaps a company has shown interest in both units. If a company has shown interest in the location, and Intu was hoping to oust Disney, it could imply a reasonably big store (one that needs all of BHS’s old first floor, and all of Disney’s floor space). But it could just be that with the end of the summer holidays, they have decided the kid’s play area is less critical.

There are still other empty shops, and the American candy shop has the look and feel of a pop-up shop, similar to the shops that preceded it in that location.

Toys R Us is still empty, and the sign still hangs, sadly, above the shuttered doorways.

Why would they do this? Disney themselves aren’t struggling, perhaps the stores aren’t as profitable as they once were, but this one is.

The store is on target and exceeding it, and in fact, doing better than others in the area. So, why then, are they closing it?

As is usually the case, it seems to be about money, in particular rent.

Whether Intu wants to charge more, or Disney is trying to haggle them down with all the empty units, neither one will readily budge. The outcome? A few more jobs lost, and Uxbridge losses another draw.

There are no real winners here.

So When is the Last Day of Trading?

So, on a more positive note; who do you think will be going in there? If anyone does at all.

Maybe a sixth Costa, now that coco-cola have bought them?